In this together since 1918 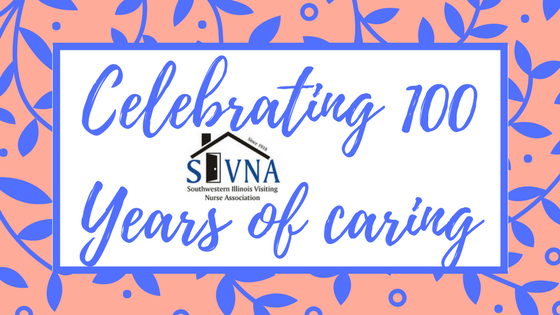 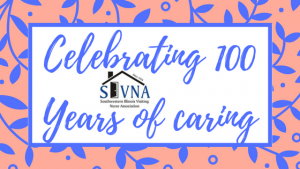 A walk through the last 100 years.

Southwestern Illinois Visiting Nurse Association (SIVNA) officially began on January 1, 1918, with a staff of five nurses and sixty-three patients transferred from the St. Louis Visiting Nurse Association.  Cash on hand was $600 in borrowed funds and a contract with Metropolitan Life Insurance Company to provide nursing care to eligible policy-holders. Currently, SIVNA has a staff of 92 and serve just over 10,000 people in 2017.

Providing nursing care to the sick and injured in their home regardless of race, creed or their ability to pay and working with community organizations to improve the health of its residents was what drove their work in 1918 and still does today.  The great influenza pandemic of 1918 enabled the agency to provide a valuable service to the community.   During that epidemic between 50 and 100 million people are thought to have died, representing as much as 5 percent of the world’s population.  That was the beginning of a long tradition of caring for the SIVNA.

Many of the projects SIVNA pioneered have become the function of state and local agencies such as the Child Welfare Program.  In their first year, 3,188 infants and children to age 6 were weighed, measured and given nutritional counseling.  This was a joint program of SIVNA, Red Cross, and a child specialist.  These later became the infant welfare conferences and were continued by the East Side Health District when it was organized in 1937.

SIVNA worked closely with the Tuberculosis Society in providing nursing care to the tuberculosis patients.  During 1921, these two organizations working with a physician began school health examinations.  Also in 1921, assisted by the State Board of Health, four clinics for crippled children were conducted.  A special fund was established by the Board to pay for braces, casts and other corrective appliances.

The East St. Louis Journal assisted the agency in establishing a milk and ice fund for indigent infants and children.  This fund was established in 1921 and continued through 1945. Dental health was another concern in the early years.  Queen’s Daughters assisted in the purchase and distribution of toothbrushes for every school child in East St. Louis.

The 50’s and 60’s brought new organizations and additional community services.  In 1951, SIVNA began to work with the Cancer Society which furnished funds for the nursing care of cancer patients, dressings, and supplies.  In 1959, the George Washington Hi-12 Club began their hospital bed project with 35 beds.  This project was carried on by a special committee of the club.

January 1959, the SIVNA Board gave their approval to serve as the parent organization for the proposed home care program.  January 1960, rehabilitative restorative nursing was initiated.  One nurse attended a special course at the Rusk Institute in New York on July 1, 1961, a homemaker program began on a three-year pilot basis with private funding administered by a Board of Directors.  The coordination of health services, home-helper, or home health aide services has been an invaluable supplement to the nursing program. On July 1, 1966, SIVNA became a provider under Medicare.  SIVNA was instrumental in working with the Medicare program in the early years as problems were identified and worked through.

A grant under the Older Americans Act of 1965 made it possible to extend services to cover all of St. Clair County.  The Illinois Department of Public Aid, St. Clair County Board of Supervisors, together with agency personnel and equipment, enabled SIVNA to qualify for these funds.  The grant was for a three-year period and provided nursing care to patients age 60 and over.  This program officially began January 1, 1967.

Changes in funding and Medicare services indicated the need for a merger of the Home Care Association and SIVNA.  The Home Health Aide Service became certified July 1, 1967, and final details of the merger were completed January 1, 1968.

During the 70’s and 80’s, the agency continued its growth and expansion of programs.  The hospital coordinating role was initiated to establish a closer working relationship with hospitals, physicians, and patients.  Under Title III, Home Health Service was expanded to Monroe County and a homemaker program was initiated.

In 1983, through a contract with the Illinois Department on Aging, and the Area Agency on Aging of Southwestern Illinois (now AgeSmart Community Resources), the agency became responsible for the Care Coordination Unit (CCU) and Title III programs.  Assessments for the homemaker, housekeeping, chore, daycare, and pre-screenings for nursing home placement are performed by SIVNA care coordinators in our service area.

December 1990, a contract was signed with the Illinois Department on Aging to follow up on victims of adult abuse.  SIVNA’s team of Senior Protective Services was one of the first in the state established to participate in the program.

In 1996, the Choices for Care Program was initiated by the Illinois Department on Aging to provide early counseling to individuals seeking long-term care services before being discharged from the hospital.  SIVNA’s CCU has experienced care coordinators who explain all available alternatives to those in need of long-term care, including services that can be provided at home. In 2000 SIVNA’s Care Coordination Unit was awarded additional territory by the Illinois Department on Aging. The CCU now serves the Illinois counties of St. Clair, Madison, Monroe, Randolph, Washington, Bond, and Clinton.

Southwestern Illinois Visiting Nurse Association continues now as in years past to provide superior individualized care to residents in our service area.  SIVNA is uniquely able to meet all the needs of area residents who seek to maintain their independence and dignity.

Thank You to AgeSmart for writing such a wonderful article, for more great articles and information on aging please visit their website at  https://www.agesmart.org/ or give them a call at (800) 326-3221